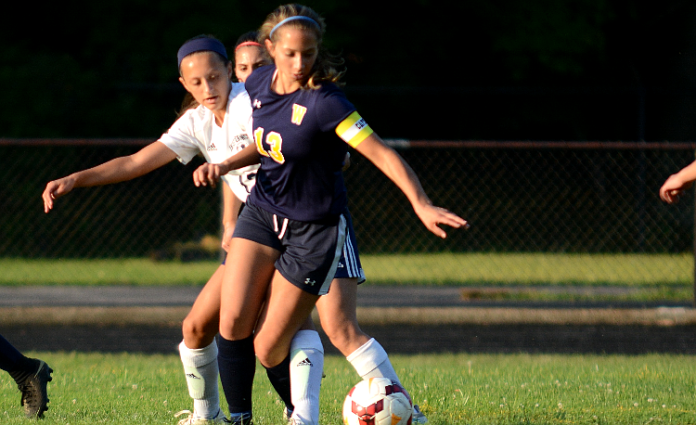 WICKLIFFE—Last fall, Wickliffe and Independence were among the greatest threats to Berkshire’s run to the Chagrin Valley Conference’s Valley Division championship.

Not much has changed in 2018 but Wickliffe’s 3-0 win over visiting Independence on Thursday could go a long way in determining this year’s league champion.

“I’m very proud of the girls and their effort today,” said Wickliffe coach Steve Gribovicz. “Independence has a very good crew and they gave us a good run for the money. We were able to capitalize on a couple of opportunities. Overall, it was a good game. It was the best game we played defensively this season.”

Morgan Gabriel gave Wickliffe an early 1-0 lead when she finished off an assist from Joelle Banks.

That lead held until early in the second half when Banks found the back of the net. Jenna Melaragno closed out the scoring late in the game.

Gianna Ranallo added an assist for Wickliffe, who improved to 3-0 overall and 1-0 in the Valley Division.

“On offense, we’ve been stressing to them to make sure they’re taking shots,” Gribovicz said. “The girls went in on it and they’re taking opportunities when they have them. We’re not trying to limit them at all. They put the pieces together and made it work.”

As potent as Wickliffe’s offense was, the Blue Devils were equally impressive on defense.

“Our defense has been stepping up, especially today,” Gribovicz said. “Our goalie was coming out of the box, which is new to us this year. She saved us a few times there but the defensive collectively had their marks and assignments and were able to lock them down for the most part.”

That defensive effort was complemented by the solid work of the girls in the middle of the field.

“Gianna Ranallo, our center-mid, she played very good in the middle and made a lot of great runs; we just weren’t able to capitalize them,” Gribovicz said. “Our up defenders really stepped up today. Jaina Buttari, Cassidy Haines and Olivia Wills all stepped up and covered the middle of the field for us, which was huge.”

Reni Kaiser recorded 13 saves for Independence, who dropped to 1-1.

Independence had a few opportunities early in the game but couldn’t put together the final passes to get off a clean shot.

“We’ve just got to play better and play smarter,” said Independence coach Bryan Less. “We just kicked the ball around and didn’t do the things we work on in training and the way we played on Monday. Sometimes it’s up to the girls to just play better with more effort and more heart.”