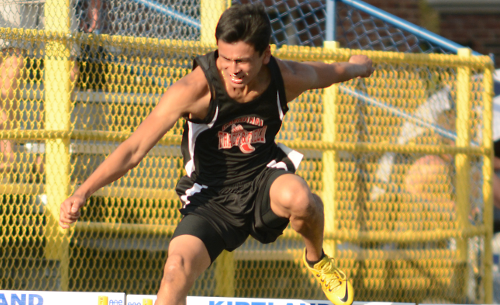 Cardinal head coach Greg Cicero found out his team has loads of potential when all his athletes are on the track at the same time.

The Huskies had a complete lineup for the 2015 George Gross Invitational at Cuyahoga Heights on Tuesday, which led to strong finishes from both the boys’ and girls’ teams. The boys finished third overall while the girls were fifth.

“It was a pretty good showing,” Cicero said. “It was a good meet for us. We finally had everybody at a meet for the first time this season. All our athletes were at the same meet and they came in with the right attitude.”

“Brandon led the way and set the tone for us by winning three of the first five events,” Cicero said. “He put everybody in the right mood.”

Wicks almost claimed a fourth title but was disqualified in the 300-meter hurdles after contacting a hurdle in the next lane near the finish line.

“It was a good learning experience for him,” Cicero said of the disqualification. “He might have been running his personal best but he just came up on the last set of hurdles too fast and he was too close. He made an attempt and knocked it over, which led to disqualification.”

Lester Troyer and Nate Peters finished first and second, respectively, in the shot put. Troyer won with a toss of 44-01 while Peters threw the shot 41-11.75.

“They come in and work hard in practice, all our throwers do,” Cicero said. “We haven’t had Nate in meet all year so this was his first meet. Lester has been to all the meets but he has a full time job so he doesn’t get to practice all the time. We know they’re talented and they came out and blew away the field.”

Anna Avalon claimed the title in the discus with a throw of 90 feet, 10 inches.

“She really was excited,” Cicero said. “She let out one of those screams when she let it go. She knew it was a good throw. I don’t know that she has ever thrown 90 in a meet. For her to improve by about 12 feet already this year is great. She works extremely hard and could be one of our best throwers we’ve had in a long time.”

“Craig Shanower ran a bunch of our relays too,” Cicero said. That was only his second time ever running a competitive 800. He led it off with a pretty good opening leg. He ran about 2:20. It was nice and controlled. Afterwards he said, ‘I should start kicking earlier. I had more left.’ To have a better guy’s 4×8 is a blessing. He’s doing a good job leading that group right now.”

“She’s come a long way,” Cicero said. “We have six throwers and she’s the most experienced. She’s dealing well with the competition on the team and performing well in meets.”

“They had a productive meet,” Cicero said of Lucarelli and Lechene. “They’re veteran runners and they’re able to go out and prepare and take care of the business they need to. They ran two pretty good 400’s each and showed they’re going to be someone to contend with later in the season.”

The Huskies travel to East Palestine on Saturday.