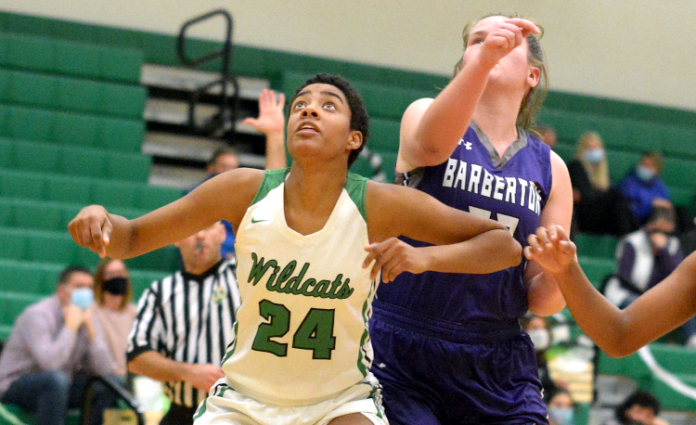 MAYFIELD—Spotting visiting Barberton a 14-point lead wasn’t in Mayfield’s game plan but that’s exactly what happened in the Wildcats’ season-opener on Tuesday.

The Wildcats cut their deficit to 10 points at halftime and pulled to within three of Barberton but never got over the hump and lost, 45-39.

“We spot them 14 but we fought and clawed back to make it 10 at the half and then got it to 30-27 at one point in the second half,” Mayfield coach Ryan Looman said. “Even when they pushed it back up to nine at one point, we got it back down to four. There’s a lot of first-game stuff we have to clean up. It’s not a moral victory but rather think of it as the foundation we’re going to build this season upon.”

Barberton drained a pair of 3-pointers and benefited from a few early Mayfield fouls as it built its double-digit lead.

Alex Duncan finally scored Mayfield’s first points of the game but that field goal came with just 3:23 remaining in the first quarter.

“We had practiced at a scrimmage level this week,” Looman said of Mayfield’s slow start. “We didn’t have that next step in our game yet. We played a freshman tonight, two sophomores and a junior who was coming back after missing a year, and sometimes it takes a little bit to kind of kick them in gear and get them used to what the high school game is about. Any team will tell you there’s a difference how you play in a game and how you scrimmage at times and I think that’s how we were practicing. It just took us some time to acclimate and adjust to the speed of the game and what Barberton was going to do.”

Mayfield even won the second half, 26-22, but the early hole was too much to overcome.

Despite the setback, the Wildcats showed they have the fortitude to rise up during tough times.

“We got out and ran and we opened up some passing lanes for ourselves,” Looman said. “We attacked the gaps in the defense. Once we settled down and realized what we could do against them, which made it a different ballgame. It was just a little too late for us.”

Hannah Peterson and Ashley Dearden hit back-to-back 3-pointers in the third quarter to help the Wildcats close the gap.

Duncan led the Wildcats with 12 points while Peterson and Uriah Jennings both finished with seven. Dearden contributed with five points, Finotti and Olivia Nicolli each added three and Katie Kirby finished with two points.

“We weren’t relying on one where I think we’ve done that in the past,” Looman said. “We’ve expected one person to kind of do everything. Today, different people stepped up in different spots. Shots are either falling or they’re not, that’s just something we have to battle through. I was proud of how we continued to manufacture looks. It wasn’t the prettiest at times but we started to rely a little bit more on who we wanted to be.”

Peterson led the Wildcats with 10 rebounds.

Mayfield returns to action on Monday at Norton.