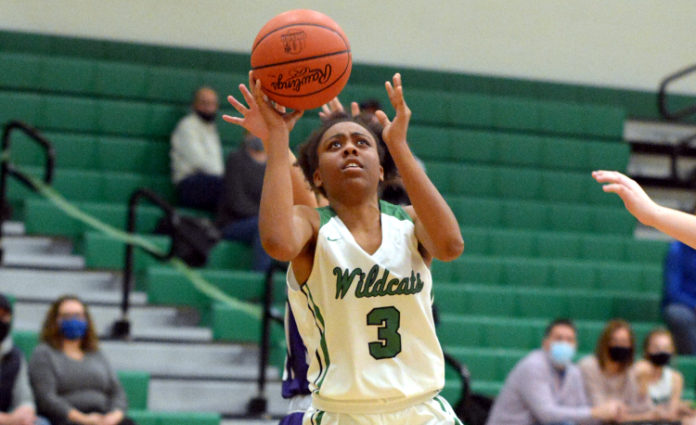 Mayfield bounced back from a tough loss on Friday with a 48-34 non-conference win at Berkshire on Saturday afternoon.

The Wildcats lost every phase of the game in 53-19 loss at Copley on Friday night and got off to a slow start in the game against the Badgers but pulled away in the fourth quarter to pick up their first win of the season.

“Today was definitely a must-win type of situation,” said Mayfield coach Ryan Looman. “We simply did not play well last night at Copley and today was a chance for our girls to decide whether they were going to accept how they have been playing or try and change it. While today wasn’t perfect, there were moments where they went out and got after it.”

Playing two games in just over 12 hours wasn’t an ideal situation but in this year of uncertainty, the Wildcats will take any chance they get to play ball.

The quick turnaround also helped the Wildcats from dwelling on their poor performance at Copley.

“I think after last night, our toughness was in question a bit, both mentally and physically,” Looman said. “We can’t be soft and we can’t play soft, so having our hands forced and playing a back-to-back like this was just what we needed. Berkshire played hard and all of the credit goes to their players and coaches.”

The Wildcats took a 34-27 lead into the fourth quarter and outscored the Badgers down the stretch, 14-7.

Uriah Jennings scored a game-high 19 points for the Wildcats. Hannah Peterson and Alex Duncan both contributed to the win with eight points.

“Uriah Jennings had her best game in her young career with 19 points, five steals, three rebounds and three assists,” Looman said. “She was straight gassed at the end of the game and I was so proud of her effort after not having her best last night. Hannah Peterson also had a solid game with eight points, 10 rebounds, and four steals. Her length and athleticism were evident all game long. Last, Alex Duncan had eight points and four steals.”

“We played quite a few kids tonight, especially early and I was really happy to see Katie Kirby step up and take advantage of the moments she was given,” Looman said. “She made an impact on the game. I’m also really proud of Olivia Nicolli. Every team needs the player who does the little things and Liv has been that for us.”

With the win, the Wildcats snapped a three-game losing skid and are now 1-3 on the year.

“We are a team that needs to play and play a lot,” Looman said. “While we’ve got plenty of things we need to clean up in practices, our growth is going to be the result of game competition. I think we learned how to deal with tired legs, adversity, and a team that wasn’t going quit or go away on Berkshire. We couldn’t hit the broad side of a barn from deep and had to figure out ways to score. We fought through mistakes and didn’t crumble when things didn’t go our way. Learning how to deal with some of the problems that have plagued us in our losses is big and I’m proud of how the girls kept pushing.”