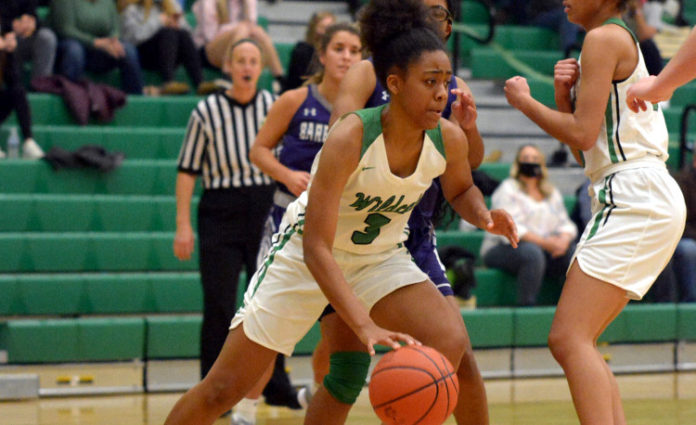 Mayfield ran its winning streak to four games with a thrilling 51-48 overtime win against Cleveland Heights at Rocket Mortgage FieldHouse on Friday.

The Wildcats rallied back from a halftime deficit to force the extra period.

“This was a really awesome experience for our girls tonight,” said Mayfield coach Ryan Looman. “Getting to be on that floor in that environment is something they’ll carry with them. That being said, it took us a little while to get going tonight. We got down early and battled back. The fact the girls just kept chipping away says so much about their grit and heart and we are incredibly proud of them for that.”

Adding to the exciting win was the fact the Wildcats played inspired basketball thanks in part to the opportunity to play on the same court as the Cleveland Cavaliers.

“We wanted this be an experience for them,” Looman said. “In this season, there’s been times when we’ve had limited fans or no fans at all and to be able to play on that floor in that arena and have fans there as well was simply memorable–then to do it in the fashion we did. Playing a back to back on a big floor can offer plenty of excuses but the girls gutted through and came away with a win.”

Cleveland Heights held a slim 7-5 advantage after the first quarter and extended that lead to 21-15 at the break.

Mayfield pulled to within 28-27 after the third quarter and outscored the Tigers in the fourth, 15-14, to tie it at the end of regulation.

Jennings finished with a game-high 19 points.

“It was very exciting, but I couldn’t do it without my teammates and my coaches,” Jennings said. “It was a tight game and Cleveland Heights did not back down. I knew I had to get to the rim and be more aggressive on the offensive side and push the ball. Overall, it was a team effort.”

“Heights pressured the ball and made us play 94 feet,” Looman said. “I thought they dealt pretty well with the pressure once we settled down and they kept answering the call. Hannah Peterson and Daeshawna Harwell played tough in the post as well. We let their posts dictate a little too much at times tonight but those two kept battling and working to give their teammates a shot. I’m really happy with how this team is becoming just that. We’ve eliminated some distractions at times this season and our girls have really come together and keep pushing themselves to be successful.”

Mayfield improved to 5-5 overall. The Wildcats host Lakeside on Monday.