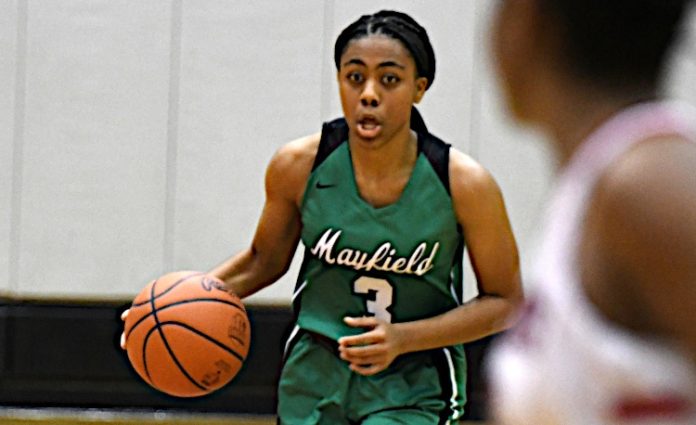 Mayfield rallied back from a double-digit halftime deficit but ran out of time in a 59-52 loss to Hathaway Brown at Ursuline College on Saturday.

“We were really happy with how we battled in the second half,” said Mayfield head coach Ryan Looman. “Before we had to foul, we had cut it to six points with like 40 seconds left in the game, so you’re in the game. You make one shot and it’s a one-possession game. I think that just shows our maturation process.”

That maturation process has been the focus during a season in which the Wildcats have started 1-5.

Mayfield graduated several key players from last season and the roster is filled with underclassmen. Despite their inexperience, the Wildcats pushed the 3-0 Blazers to the limit.

“As a team, we’re running out a freshman, two sophomores and a junior out there on the court late in the game with a senior who was buried on the bench last year,” Looman said. “The kids are learning that you’ve got to come with the energy that you play with to scramble back into it, that’s got to be the energy you play with for 32 minutes, not just 19 minutes or 18 minutes. The good teams do that and they know how to play throughout the game and that’s kind of the process we’re going through.”

The loss was the second straight for Mayfield, who struggled offensively at Perry on Wednesday but played its best defensive game of the season in holding the Pirates to just 39 points.

As they did against the Pirates, the Wildcats played their best basketball in the second half against Hathaway Brown.

“I think that better late than never mentality is part of it,” Looman said. “A lot of it is confidence. When the girls start to understand that if we can do this and we can play like this in spurts and then learn how to extend that over a period of a game, that’s a big thing. That’s one thing we took away from the Perry game. Sure, they beat us pretty good but there was that bright spot on defense.”

“I was really happy with Alex Duncan. This is her first year playing varsity, so she’s understanding what it takes in terms of finishing through contact, when to take the jumper, when to attack. She played really good today,” Looman said. “Hannah Peterson is still coming back but she’s starting to understand too, yeah, she’s a forward, but she’s one of the most athletic forwards in the area, and she can use that to her advantage.”

“I was happy with our seniors,” Looman said. “Ashley Dearden played well and Olivia Nicolli hit a big shot for us. Gabby Moore, one of our freshmen who is up on varsity, she got a concussion, I think she played 90 seconds against Barberton in the opening game, and then came back against Perry. She was able to get on the court today for some extended minutes and found the flow of the game. She ended up with seven points and had some free throws.”

The Wildcats will look to rebound at Lake Catholic on Monday.

They’ll approach that game the same way they have every other game this season and look to show continued improvement.

“Not that you’re playing for moral victories, but we’re starting to piece together what it takes to be a good basketball team,” Looman said. “That doesn’t just happen overnight. That can be a longer process than you hope it to be but it’s still a long season and we’re only six games into it.”