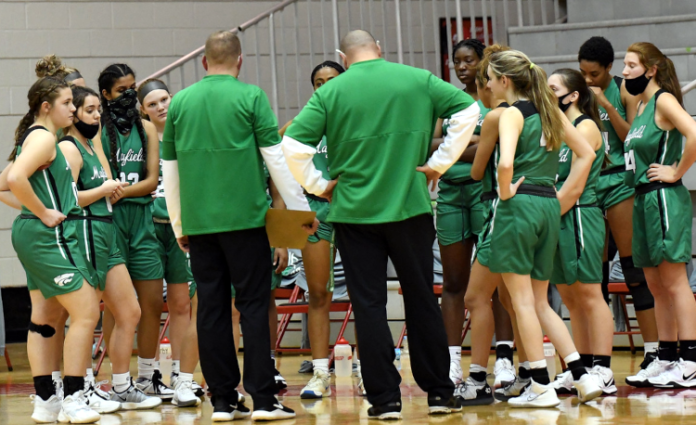 Freshman Gabby Moore sank a pair of free throws late in double overtime to lead Mayfield to a 69-67 win at Riverside on Wednesday.

The Wildcats, who got off to a strong start, overcame a double-digit deficit in the second half and also faced their fair share of adversity in the win.

“I thought we played a really good first quarter,” said Mayfield coach Ryan Looman. “We were able to move the ball and get to the rim and I thought we played really well defensively. To Riverside’s credit, they fought back in the second. A lot of people stepped up and hit some key shots and made them pay in key spots. It was a real back and forth game.”

Mayfield led 15-9 after the first quarter and 30-26 at halftime but Riverside got hot in the third and pulled away from the Wildcats. A late Mayfield surge cut the Riverside lead to 40-38 heading into the fourth quarter.

The Beavers drained a 3-pointer with two seconds left in regulation to force overtime.

Mayfield was forced to play the first extra period without Hannah Peterson, who had fouled out in the fourth with 10 points and a team-high 10 rebounds. Uriah Jennings, who finished with a game-high 16 points, fouled out in the first overtime leaving the Wildcats without two of their best players in the final frame.

“It became a game of attrition at that point,” Looman said. “We played both overtimes without Peterson and Uriah Jennings fouled out late in the first overtime so we played the entire second overtime without her.”

That forced several Mayfield players to rise to the challenge and Dae’Shawna Harwell, Ashley Dearden, Alex Duncan, and Moore answered that call.

“In the second overtime, Dae’Shawna Harwell was really, really good. Defensively, she ended up with eight rebounds and four blocks and a lot of those came in the second half and overtime,” Looman said. “Alex Duncan played really well. That was probably her most complete game in terms of running our offense and attacking the rim. Uriah was solid and Ashley really stepped up with four 3s tonight. That was big for us.”

Dearden and Duncan both finished with 13 points and Moore contributed with a career-high nine.

Moore’s late free throws were the difference in the game but she also made a defensive play on a Riverside inbounds play that led to a turnover.

“As I stepped up to the line, I first thought that I need to hit these both, and as I got the ball from the ref, I just told myself this is just practice knock them down,” Moore said of her free throws. “After I made both of them, I felt great. I felt like I did what I needed to do, but we still had to get a few stops on the defensive end.”

Moore has scored 39 points in 12 games this season but after hitting a pair of game-winning free throws her confidence is soaring.

“As a freshman, I feel like the game boosted my confidence but I also know that I can never be satisfied and there’s always room to improve,” she said.

The Wildcats, who improved to 8-7, host Richmond Heights on Thursday.