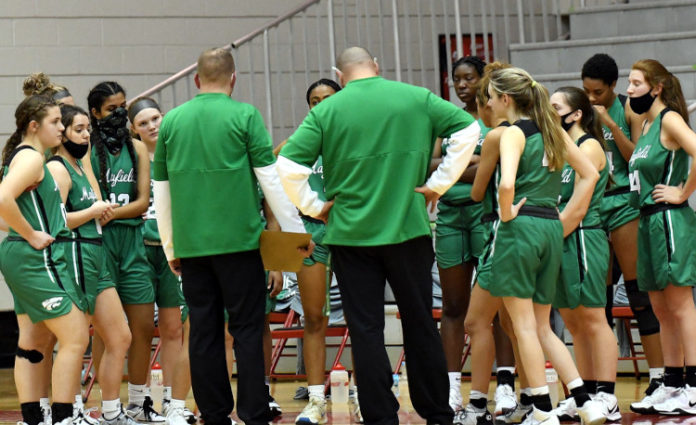 The win was the third straight for the Wildcats, who improved to 4-5 on the year.

“Wins are always big, especially when you face an hour bus ride and getting to the gym and sitting for a while before you play,” said Mayfield coach Ryan Looman. “I’m very happy with how the girls came off a nine-day break and were focused in practiced, worked hard to rep the game plan, and most importantly, kept coming together throughout the course of the game. It was a team win and these girls keep stepping up for each other.”

“I’m really proud of how our kids met each of the pregame keys we set forth,” Looman said. “I have been stressing the need to be a faster starting team and we came out and got up 12-1 before the game of runs began. We held their top two scorers in check and won the rebounding battle. We do those things in any game and we’ll give ourselves a chance.”

Mayfield led at halftime, 24-16, but outscored the Colts by 10 points in the third quarter to pull away.

“The third quarter was huge for us,” Looman said. “Anytime you can get a 21-point quarter will propel you forward in a positive way.”

The Wildcats used the first half to settle in and once they found their rhythm they were able to adjust to what Cloverleaf was doing on both ends of the court.

“Cloverleaf was a tough team to prepare for because we saw them do so many different things on tape defensively and there was some uncertainty to what we would see throughout the early portions of the game,” Looman said. “Once the girls settled down, started to read the defense a little more, and then attack the gaps and lanes that opened, good things happened. In the third, we buckled down defensively early on and the girls did a really nice job executing the minor adjustments we made to some of our offensive movements at the half. Extra passes and unselfish play on the offensive end were the catalysts of that.”

Dearden paced the Wildcats with a career-high 19 points and she also set a career mark with five 3-pointers in the game.

“The key was to keep good ball movement and when they trapped some of the other players, it allowed me to get open and get some shots,” Dearden said.

Peterson recorded a double-double as she also pulled down 16 rebounds and had five steals and five blocked shots. Jennings led the Wildcats with five assists.

In all, eight different Wildcats scored in the game.

“Having eight or nine kids get in the scorebook always helps,” Looman said. “I love how these players are settling into different roles and adjusting their games, both which add to the balance we are seeking. Having five kids shooting 50-percent or better from the field tends to open things up for others and credit goes to them for stepping up and taking advantage of the opportunities to score.”

Chardon bounces back with win at Mayfield