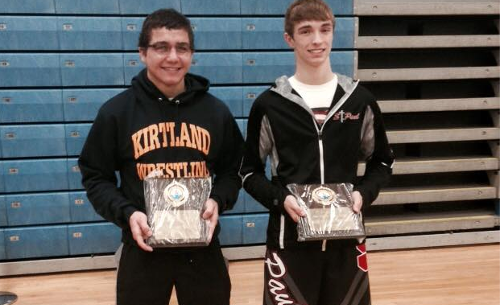 Kirtland wrestlers Brendan Williamson, Clayton Davidson and Dylan Diemer all won individual championships to lead the Hornets to a fifth place finish at the 2015 Northwestern Husky Invitational Tournament on Saturday.

Eight of Kirtland’s 11 wrestlers placed among the Top 4 at the event.

Davidson finished 5-0 to win the 160 pound weight class and the upper weight MVP award. He defeated Northwestern’s Ryan Morr, 9-2, in the championship bout.

“He went out there and once again he had a good tournament,” Francis said.

“He handled the kid pretty easily in the finals,” Francis said. “He wrestled well. He totally dominated.”

Diemer, who is back on the mat after a one year hiatus, won the heavyweight bracket with a pin in the championship bout.

“He wrestled sophomore year and did very well then he didn’t come out last year,” Francis said. “He’s getting back into it right now. He’s coming along really nicely. He’s learning a lot in the room. The stuff we’re teaching him he’s doing it and it’s paying off for him.”

Dylan Choe finished second and Anthony Porter was third, both at 220 pounds.

“For Choe, this was a nice tournament. It was probably the best weekend he’s ever wrestled,” Francis said. “He works out with Diemer a lot at practice and Porter does as well. We’ve been working with those guys together letting them know how I want them to wrestle against the upper weights and they came into it wrestling like that and it’s paying dividends for them.”

Evan Francis finished second at 138 pounds. He earned a major decision over Northwestern’s Shane Clark, a district qualifier last year who is ranked this season, but dropped a 5-0 decision to St. Paul’s Wes Fritz, who was eighth at the state tournament last season.

“Evan, one of his pool matches was against a ranked wrestler from Northwestern and he got a major against him,” said Coach Francis. “Against Fritz, the kid just wrestled a good match against him.”

“He had another nice tournament,” Francis said. “Every week he wrestles he’s improving by leaps and bounds. It’s exciting to watch him wrestle. You just feel that at any moment he can pull out a win. The one kid he lost to is probably going to end up being a state placer this year and he didn’t look bad against him.”

Mike Petterson was fourth at 113.

“Mike had a nice tournament,” Francis said. “He wrestled well in the pools then took fourth place. Overall he had a good tournament. I think he’d like a chance to go back and wrestle his finals match again.”