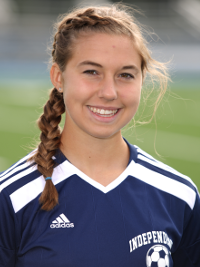 Senior Jen Wisniewski set a new school record with five goals in a single game to lead Independence to a 7-0 win over Berkshire.

“She’s been working extremely hard for four years and that was a record she wanted and she busted through,” said Independence coach Bryan Less of Wisniewski. “The three of them were just doing some things offensively like give and goes and they were just assisting each other back and forth. They were just shredding the Berkshire defense for the first 10 minutes until I started to get subs in. It was beautiful watching the three of them paly and the outside mids were doing what they were supposed to do.”

With the Blue Devils’ dominating possession, Krista DeFini recorded just one save in the victory.

That’s a credit to both DeFini and the Independence defense.

“The defense did a nice job,” Less said. “They shut down the Berkshire offense. Anything that went through, we were winning the ball and we put it back outside and passed it right back on up.”

The win was the sixth straight for the Blue Devils, who improved to 8-5-1 overall and 4-1 in Chagrin Valley Conference play.

The Blue Devils lost five of their first seven games but have found their stride down the stretch run of the regular season.

“We had a tough schedule early on and it helped me kind of move some people around and make some alignment changes,” Less said. “The team is jelling. The passing is beautiful right now. The team is just playing as a group. When I put in subs, we’re not falling off. Everyone is playing hard and winning the ball.”

Independence hosts Lutheran West on Oct. 6 and concludes the regular season against Wickliffe on Oct. 9.