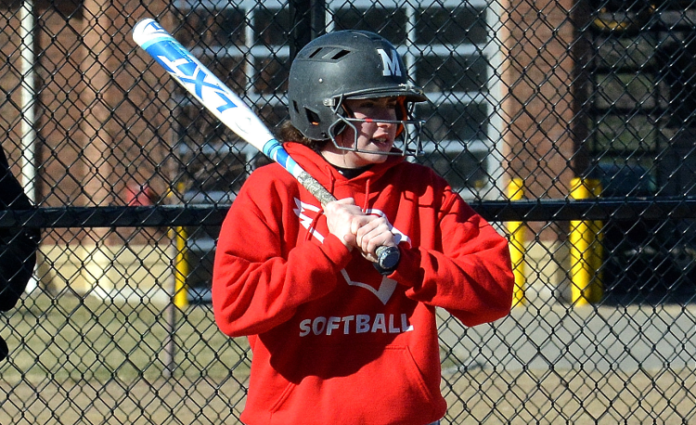 Casey McHugh went 4-for-4 with three doubles and she knocked in three runs to lead Mentor to an 11-1 five-inning win over visiting Strongsville on Wednesday.

McHugh recorded an RBI double in three of her four at-bats and scored three runs in the win.

“It was very exciting to perform so well at the plate today,” McHugh said. “I feel like I’ve been struggling a little to stay on top of the ball and stay through my swing, so it felt great to finally get the hits when my team needed them.”

With Caitlin Dems mowing down the Mustangs—she allowed just five hits and struck out eight in the five-inning complete game win—McHugh and the Cardinals offense went to work.

Mentor scored three runs in each of the first three innings and added two in the fifth to invoke the run rule.

“In the past, we have struggled with them, making the games longer then they needed to be,” McHugh said. “Our coach always tells us we need to remain strong through the whole game and not to let up. I knew we had to jump on them fast, so I knew I needed an aggressive approach coming up to the plate.”

Peyton Dolejs opened the top of the first with a single and McHugh doubled her home for a 1-0 lead. Raegan Thompson, who finished 3-for-4 with three RBI and a double, singled to make it 2-0 and later scored to push the lead to 3-0.

Dolejs drew a two-out walk in the second and McHugh singled. Thompson then doubled to make it 5-0 and she came home on an error that pushed the Mentor lead to 6-0.

Adrianna Sluga reached on an error in the third, Avalon Gollin hit an RBI single and McHugh doubled her home then scored on a passed ball to make it 9-0.

Gracie Sands led off the Mentor fifth with a single, Dolejs reached on an error, McHugh hit an RBI double and Thompson’s RBI single ended the game.

“The pitching we faced today was different than what we have been used to, so I saw a few pitches and then adjusted my swing,” McHugh said. “It felt great to do my job as the No. 2 hitter. It’s always a great feeling to be a big part in helping the team get another win.”

Mentor won its fifth straight game to improve to 6-1 overall. The Cardinals travel to Solon on Friday.