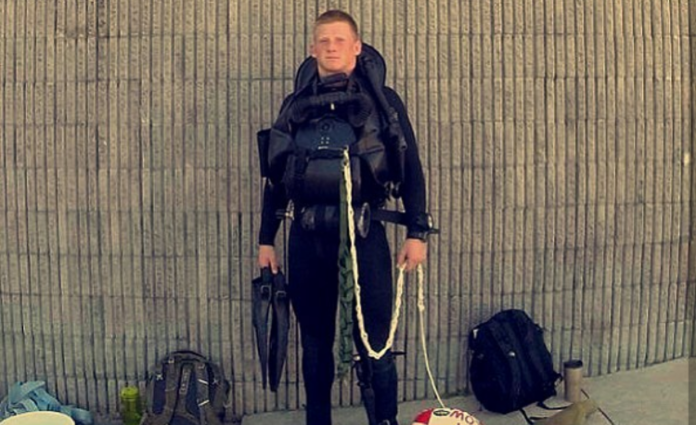 With the start of the 81st Annual OHSAA State Wrestling Championships on Thursday at the Schottenstein Center in Columbus, the 2017-2018 wrestling season is nearing its end.

While the best in the sport will showcase their skills over the three-day event, Kirtland alumnus John Miller is gearing up for the final week of Navy Diver training in Panama City, Fla. Miller, who played football and baseball at Kirtland, also wrestled for the Hornets during his final two years of high school and he credits the sport for providing him with the mental and physical toughness to make it through the grueling 15-week program.

“I attribute all my success right now, getting through all the training and mindless beatings, to wrestling,” Miller said. “You’re able to grow from it and see who you really are. I guarantee you, if I didn’t go out for wrestling my junior year and win just three matches and get my butt handed to me in my other matches then I wouldn’t be where I am today. I was able to grow so much from that.”

Miller’s story isn’t unique but it’s becoming much rarer as the sport continues to see declines in participation.

Three weeks ago, just 97 wrestlers competed at the Division III sectional tournament at Beachwood. Twenty years ago, each of the 14 weight classes was filled with 16 wrestlers. This winter, no weight class had more than nine wrestlers entered.

While there are many explanations for the decline in participation, one thing has remained constant: the benefits of the sport.

In 2016, Cael Sanderson, the current head coach at Penn State University and a 2014 Olympic champion who concluded his college career with a 159-0 record, wrote an op-ed on the sport and why his children will wrestle.

Among the benefits of wrestling Sanderson cited were the self-discipline and toughness each athlete develops. He also discussed the value of wrestling as a foundation sport due to the improvements made in balance, agility, hand-eye control, coordination, flexibility, strength, speed, explosiveness, mental focus and endurance.

Miller leaned on those benefits during both Navy boot camp and the Navy Diver program, which has a very high rate of attrition.

In fact, Miller was part of a class of 45 diver prospects and was one of just 15 who have made it through the first 14 weeks of training.

“At some point, everyone left in the class wrestled in high school,” Miller said. “You have like 45 guys who want to be there but in the end it’s who really wants to be there and be a diver. The grit and grind of it, I attribute a lot of that to wrestling. There was a lot of treading with weights and mindless beatings.”

Sanderson also cited the humility one develops from the sport as a benefit.

“Wrestling teaches humility better than a 1-on-1 sport,” Sanderson wrote. “Winning and losing in a 1-on-1 setting brings humility. There is nowhere to hide and no one to blame but yourself. All wrestlers will lose at some point and doing so in these conditions teaches humility.”

Miller learned that the hard way.

After helping the Hornets win the 2015 state football championship, Miller decided to join his teammate, Gus Mormino, on the wrestling team. His first year on the mat ended with a record of 3-18.

“My junior year, I was playing football and we were in the state title game, down at halftime and we came back to win,” Miller said. “I went into wrestling and I felt on top of the world. You win the state title and whole community was excited. You’re a small town celebrity. Then you go into wrestling and it’s humbling. That’s all I can say, it was humbling. You go into it, you might be a god at another sport, but I went into wrestling my junior year and won three matches. I just won a state title in football and I come into this sport and won three matches. I was like, ‘Wow, what do I need to focus on to get better at this?’”

Miller did get better, he finished his senior year with a 14-17 mark, but the wins weren’t quite as important as the confidence and mental toughness he developed on the mat.

Those attributes paid off in the early parts of Navy Diver training in Chicago.

“I remember one event specifically back in Chicago,” he said. “It was literally eight weeks of just grinding. You weren’t learning anything. They were just thinning out the herd and seeing who really wants to be there before you get to Panama City for Dive School. It was finding out who really has what it takes.”

Miller and the rest of the his training class arrived at the dive pool early, as they did every morning, but before donning their gear and getting into the pool they first went through a grueling—and typical—training session.

“You always got beat up before you went in the pool,” Miller said. “You just do what they say. If they say drop, you drop and stay in the pushup position until they say to get up. From there, there was a baseball field up front and we had to bear crawl from the pool all the way up the hill to the baseball field and then bear crawl a lap around the baseball field. Once people started dropping to their knees, everybody was just tired and couldn’t hold themselves up anymore, so they had us army crawl through all the grass and mildew.”

As the youngest member of his class, the deck was stacked against Miller from Day 1.

“I remember people were quitting and I was like, ‘Why are you quitting?’ I couldn’t understand it,” he said. “I was the youngest one in my class by one or two years. They say the prime age for going through this program is 21, 22 or 23 and I just turned 19 two days ago, so the odds were against me already. What did I have to do to make sure I stayed here and fight with these guys? I thought about that and I was like, what is the hardest thing I have done in my life?”

Not only was wrestling among the greatest challenges Miller faced, he did it while also working an odd job.

“My junior year, I did snow plowing during the year and that was of course during wrestling season so I would wake up at 1:00 or 2:00 a.m. and go snowplow until 6:00 a.m.,” he said. “Then I’d go to school and then go to wrestling practice and be dead tired. I’d be tired but I’d go to practice and Coach (Scott) Francis and Coach (Jim) Pawlowski didn’t care. Nobody has an excuse. There’s no reason that I can say I’m tired because I was up at 2:00 a.m. That’s my problem, not theirs. Why should they slow down training or the practice so I could keep up? They didn’t give me any sympathy and honestly, that was the biggest deal for me. It showed me that nobody cares how hurt you are or how tired you are; just do what you need to do and you’ll thank them for it later.”

Miller did thank them during a recent break in training when he showed up in the Kirtland wrestling room.

“I have never felt stronger or been more flexible than in wrestling season,” Miller said. “It will help you in life, in football; it will help you in swimming or golf. There are so many benefits to it. I don’t understand why more kids don’t do it. I think kids are afraid to go out and wrestle because they’re afraid of what happened to me. I won three matches. Yeah, it’s embarrassing but I can’t believe the amount that I’ve grown from that. Nobody remembers that. They remember you were there and you tried your hardest.”

Miller isn’t alone in his praise for the sport.

Unfortunately, the numbers continue to dwindle as more and more athletes avoid the mat. Some specialize in another sport while others prefer to hit the weight room during the winter months.

According to Miller, and many others, that’s a big mistake, especially for football players.

“You’re growing up and you have all these opportunities to play these sports and do everything. Why not do it? Every season, every opportunity you have and every sport, you’re not going to have that chance again,” Miller said. “You’re going to improve in the weight room if you just lift in the offseason, but literally, there is no better workout and nothing that will make you quicker. If you want to improve in football, do wrestling. If we had more linemen, more heavier weights, on the wrestling team, then I guarantee you they’d have no problem in the football season. There is no better workout than wrestling practice.”

Wrestling didn’t hurt Mogadore’s Paul Skye or Pymatuning Valley’s Gaige Willis during the football season. Both performed at a high level as two-way players for their respective teams and both entered that championship match undefeated. Willis, a 2017 state champion and 2016 runner-up, won the match, 6-5, to improve to 40-0 on the year. Skye, who finished eighth at state last year and sixth the season before, dropped to 41-1.

Yet, despite their success and the dozens and dozens of current and former NFL players who wrestled in high school, many football players choose another path.

That has to change if wrestling is to survive at the high school level.

“I would have all my offensive linemen wrestle if I could,” ~John Madden – Hall of Fame NFL Coach

July 2, 2022
Elena Scott (North Olmsted 2025) put together a solid weekend in earning the Vipers 16U Player of the Week award.