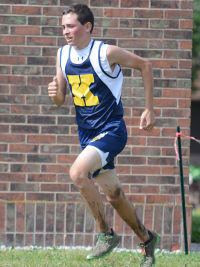 Heavy rains pounded Geauga County throughout the week leading up to the 2014 Berkshire Early Bird Invitational, which took place at Kent State University’s Geauga Campus in Burton on Saturday.

“I’m pretty happy with how they performed,” said Kirtland head coach J.P. Moran. “I knew the times weren’t going to be that good after I walked the course with them. We have some freshmen that have flats that they wore because they don’t have spikes yet. I don’t have to tell them too much because they learned right away that spikes make a big difference in conditions like this.”

Kirtland’s girls finished 22nd overall and with only four boys the Hornets did not score as a team in the boys’ race.

“Our senior, Clarice, that was her first 5K in a varsity uniform and she was our third,” Moran said. “Christine and Katherine ran just like they were supposed to as our top two. Crissy ran where she was supposed to be too. She was in our top five.”

“I was really happy because two of our freshmen were our fifth and sixth runners, so that was great,” Moran said.

“The guys, I was real happy with their times and how they competed. Unfortunately, we couldn’t score as a team. We need a fifth runner,” Moran said. “Colton, a freshman, that was his first 5K ever in a varsity uniform and he ran a 21:17 in these conditions. That easily would have been in the 20’s on another course. Kevin was where he was supposed to be as our 1. Nick packed up with Josh and I was real happy with how he ran.”

Overall, Moran was encouraged by the performance of his runners and he’s confident the Hornets will continue to improve.

“I was really happy with all our first timers. I had an idea of what to expect with practice but on a course like this and in this competition with all these big schools, it was good,” he said. “Just to give credit to the meet itself, it was their first time and they were really nervous and didn’t know what to expect. They’ve got music here, you smell the food. It’s great for spectators. I think it was like a party atmosphere and it really encouraged them.

“They’re on the right path. They’ve been working hard all summer and running some other races we went too. They do a nice job at practice. As the course conditions get a little better I think they’re heading in the right direction for sure. I’d just love to have a fifth runner.”