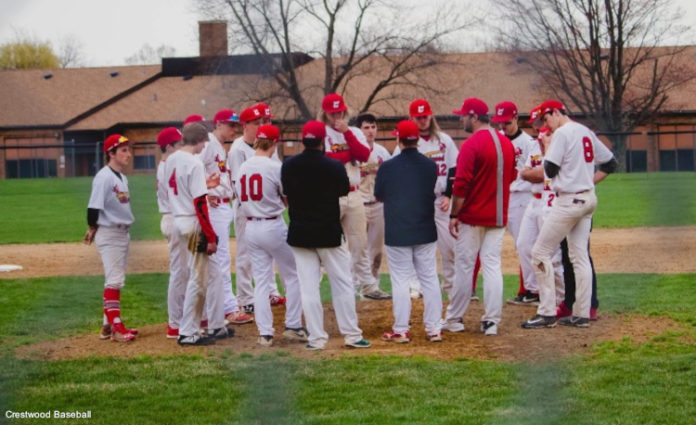 Crestwood opens the 2021 season with a lot of new faces in the lineup as the Red Devils prepare for their first season of Chagrin Valley Conference play.

The Red Devils finished 14-13 in 2019, their last season in the Portage Trail Conference, and open the new year with only two players with varsity experience.

“This year will be the youngest and most inexperienced team in my 11 seasons as head coach,” said Crestwood coach John Bakalar. “The expectation is that we will be coachable, work hard, hustle, be great teammates and continually improve and be playing our best baseball come (the postseason) tournament. With a young team, there is so much potential. We are going to go through growing pains but we need to be able to stay positive and see the big picture. We have some players who are going to be the centerpiece of this team’s core for a long time. We can close the gap between where we are and where we want to be by bringing a consistent work ethic and a growth mindset.”

Crestwood does return five players who would have gained valuable experience last spring if the season wasn’t canceled. Two players return from the 2019 squad that won a sectional title but this year’s team will feature seven freshmen out of the dozen players on the roster.

“Last season, we had 23 players on the roster, this year 12,” Bakalar said. “Seven players graduated from 2020 that would have been key contributors as we looked to complete in our final season in the Portage Trail Conference and looked to punch our ticket back to the district tournament. The past few seasons we have been able to have success in the postseason and were looking to continue in the same direction while taking the next step. COVID really hurt our program’s momentum and we have had to re-establish our culture and values. The players on this year’s roster lost out on a valuable year of experience but also learning from the upperclassmen in the program that had done things the Crestwood way and experienced both the highs and lows and share their wisdom. With only five returning players from last year’s roster, we needed to be intentional with how we develop depth. With the 12 players we have, we have been working them out at just about every position except catcher to create versatility and depth. Our biggest challenge is our depth and we are going to have to put players into situations that they may not be ready for but in the long run will be a key to their development and growth.”

“The Red Devils have a history of having a strong backstop, with every starting catcher being named on an All-Conference team at some point in their career dating back to 2011,” Bakalar said. “Jonas Honeycutt would have started as a freshman and will be relied on to handle the bulk of the catching duties in 2021. Honeycutt is a talented defender and could also be asked to fill multiple positions throughout the season. Juniors Kaden Plechaty and Kyle Gregel have shown the ability and willingness to serve as the backup catcher.”

The rest of the lineup will be filled by freshmen.

J.P. Wrobel will start in center field, Jimmy Peters is slotted at second base and Jacob Spaeth will play third.

Charlie Schweikert has big shoes to fill at shortstop.

“We have the difficult task of replacing second-team All-Ohio shortstop Collin Gross, who was a two-year starter,” Bakalar said. “The shortstop position will be determined by who is pitching but will feature multiple players including juniors Jake Rowe, Jacob Dustman, freshman Charlie Schweikert, and sophomore Jonas Honeycutt.”

Schweikert, Rowe, and Honeycutt also are expected to start and Plechaty, Gregel, and Spaeth will come out of the bullpen.

Crestwood’s lack of seniors on the roster has forced the juniors to step up as leaders this season.

“With zero seniors on the team, our juniors have become our quasi seniors and have been asked to lead along with sophomore Jonas Honeycutt,” Bakalar said. “Each week, they have gotten progressively better and they have created a good comradery that we are going to have to fall back on when things go astray.”

With such a young and inexperienced roster, the Red Devils must focus on the fundamentals and control all the parts of the game that can’t be affected by their opponents such as communicating on the field, maintaining focus, and a high level of energy throughout each game.

“You cannot teach experience,” Bakalar said. “All we can do is prepare ourselves for what is to come. Our players will have to learn some things the hard way but if we focus on the things within our control and do the little things correctly, eventually those growing pains will make us stronger individually and as a team.”

Huskies pound out 12 hits in win over Fairport