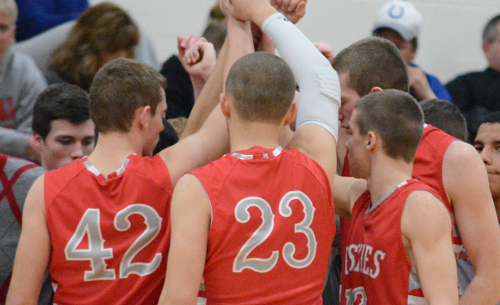 Cardinal coach Jon Cummins enters every season with the same goals and this year is no different despite the Huskies being forced to replace all of last year’s starting players.

The Huskies enter the 2014-2015 season with two seniors, eight juniors and a freshman and high expectations that include competing for the Chagrin Valley Conference Valley Division title and to beat rival Berkshire in both games and earn at least a pair of post-season victories.

“My goals each year are to No. 1 win the CVC, No. 2 beat your rivals two times you play them and No. 3 at least win two games in the tournament. If we could accomplish those goals it would be a great season for us. You kind of set the bar as high as you possibly can but I’m also realistic to know where we need to be at too.”

Cummins knows achieving those goals won’t be easy with a roster filled mostly with former junior varsity players moving up to the next level.

At the same time, lowering the bar is never an option.

“You always want to try and compete for your CVC title and I think the CVC is pretty evened out this year; I really do,” he said. “I think teams have gotten better. We’ve got our work cut out for us. I’m not going to sugarcoat it and say if we just do a couple things here and there we’ll be in the hunt. We have to play well. We can’t go in and have an average game and expect to win. We have to work for everything.”

When the Huskies tip off the season on Saturday against Waterloo, Cummins will approach that game almost as he would a scrimmage.

He plans to rotate five players at a time as he develops the rotation that puts the Huskies in the best position to be successful on any given night.

“As a coach, I always say it takes five or six games to figure out a rotation. It will probably take me a little longer with this group because I don’t know what each kid is going to give me when put into the situation of playing varsity basketball,” Cummins said. “That’s the thing with all these kids. They’re all JV guys coming up and playing varsity now. They’re just pushed right into it. They’re going to have to play against better competition than they’ve played their whole lives. We’ve got to figure it out now.”

Seniors Jerry Tamburro and Cody Hunt and juniors Craig Kaser, Kenny Petersen and Jake Francis are expected to open the season as the Huskies’ starting five.

Kaser, Francis and Hunt are the only players with any real varsity experience.

Hunt, a 5-foot-10 forward, is undersized for his position but his aggressiveness makes up for his shortcomings.

“He’s a tough kid, very hard-nosed,” Cummins said. “He kind of wears his passion on his sleeve. He really works hard out there for us. His attitude and the way he does it out there on the floor is the way we all have to play. He’s definitely a hard worker and will get after it. He’s a little undersized. If he was about three inches taller he’d be a great big man in the CVC but he’s in a guard body. He’s the heart and soul of our team.”

Tamburro, a 5-foot-9 guard, saw action in a couple of varsity games last season but spent most of his time leading the JV squad. His leadership has carried over to the varsity and Cummins will continue to count on him to guide the young Huskies this year.

“He worked really hard in the off-season and got himself into basketball shape,” Cummins said. “He’ll be a nice player for us. He’ll be starting for us this year. He’s done a lot of good things over the summer. He was very dedicated to the program. He did a lot of things for me this summer as far as just open gyms and getting the kids together a lot and playing a lot of open gyms.”

Kaser, a 5-foot-8 guard, was Cardinal’s sixth-man last season. He has developed into a solid point guard and will be responsible for directing the Huskies on offense.

“He learned a lot from playing last year and got a lot of good experience from it,” Cummins said. “This year he’s taking a little bit more of a leadership role as far as taking control of the offense a lot and controlling everything we do on the court. He’s been doing a good job with that. He’s going to be a very important person for our team.”

Francis, a 6-foot-3 forward, is more suited for a guard position but the undersized Huskies need the help inside.

“Jake is more of a wing player but he’s got to play down low for me because I have Andrew Miller, another big guy, and after that Jake’s probably the next tallest guy and he’s pushing 6-2. He’s not much bigger than that if he is that big,” Cummins said. “He always has to guard the big guy and he should be out guarding a wing. He has a lot of athleticism out there on the floor. We can do a lot of things with him. I like to get out and run and with him being out on the big guy I can do that. He’ll be guarding the ball a lot in the pressure situations and we’ll be able to double team off that. He’s very active defensively with his longer arms.”

Petersen, a 6-foot-1 forward, brings a football player’s mentality to the basketball court, which should help the Huskies, especially on defense.

“The other guys, they’ll go in that first quarter,” Cummins said. “They’re going to play. I’m going to do a five in, five out kind of thing and see how that goes a little bit because I’ve got to figure out which guys really want to go out there.”

Cummins expects freshman Luke Timas to gradually work his way into the varsity rotation. The 5-foot-9 guard is one of the most athletic Huskies and could help the team in a number of ways.

“He gives us something else that a lot of kids don’t have,” Cummins said. “He’s a one-on-one ball handler where he can create some problems. He’ll definitely be in when teams pressure us a lot and I need another ball handler out there. He’ll go back from JV and varsity, especially at the beginning of the year, and as the season progresses he may be moving up full time on varsity. It’s just a big difference. Being a freshman playing with 18 year old men out there, it’s a different ball game.”

Cardinal’s biggest challenge this season will be replacing 6-foot-7 post player Jake DiBlasio. That starts with each player having the confidence to make plays in clutch situations.

“It’s getting these kids out there to believe in themselves and believe they can play basketball at a higher level and have that confidence,” Cummins said. “I’ve got a few kids that have it but I need 10 guys to believe in that, 11 guys, that can go out there and deserve to be on the floor and play that way. There is no Jake DiBlasio we can throw inside when teams are pressuring us or we need a bucket. You can’t throw in the 6-foot-7 guy and say go to work down there. We actually have to do the little things of executing when we’re pressuring the ball and when we’re playing our zones just talking and communicating and getting to your spots. It’s the same on offense. They’ve got to know where they’re supposed to be at all times. If we’re not on the same page it’s going to be a harder time for us out there winning games.”

Another challenge is getting all 11 players on the same page.

That’s where an early five-game road swing comes into play.

“I like being able to do that, play some away games at the beginning of the year,” Cummins said. “You get a little more team bonding I think when you play away because you’re forced to be with each other a little longer. We’ll have our team meals and stuff like that and get into the gym and be together a little more. I think that’s good for these kids.”

Cummins also beefed up the schedule to keep the Huskies on their toes throughout the season. Last year, Cardinal started out strong then faded down the stretch in the more competitive part of its schedule.

The goal this season is to play consistently in all 22 games.

“I’m looking for these guys night in and night out to come out ready to play,” Cummins said. “I think if we can come out ready to play and play hard, that’s the thing, you can’t control if you’re making a shot every day but you can control your hustle and knowing where you’re supposed to be on the floor. Those are things you can control on your own. If we can control those parts and cause teams to have difficulty doing what they want to accomplish out there on the floor and we can disrupt them and create some havoc out there, that’s what we want to do.”