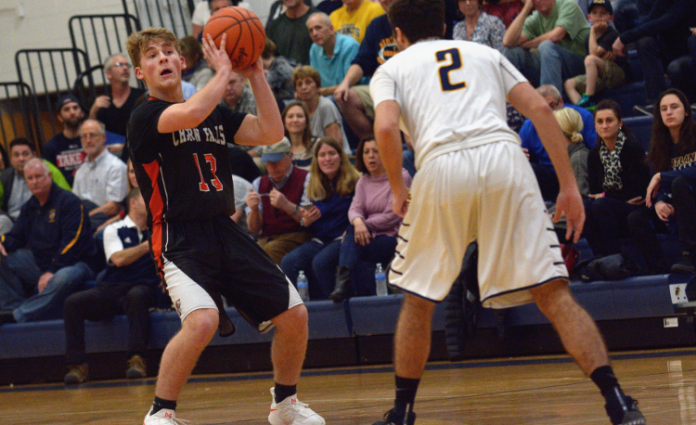 Chagrin Falls returns just one starter from last season but the Tigers do have several others with varsity experience and plenty of talent.

Head coach Dave Bargar believes his squad has the potential to be competitive in the Chagrin Valley Conference Chagrin Division and beyond.

“We feel like we have the makings for a good team,” said Bargar, who is 179-114 in his 14th year as head coach. “Overall, we don’t have a lot of varsity experience and we are young in certain spots. We’ve had great early-season energy, but we have a lot of work ahead in order to get to the level fundamentally that we need to be successful. Once we go through the learning curve that comes with an inexperienced team, we expect to be competitive within our conference.”

The Tigers, who were 15-9 overall and 10-4 in league play last winter, do return seven players from last year and they are quick and have some size. Their challenge this season is to play well on the defensive end and create plays in the open court on offense.

“In order for us to be successful on a consistent basis, we will need to defend at a high level each game,” Bargar said. “We will need to put pressure on opposing defenses by executing and using our unselfishness to our advantage. We will also need to focus on rebounding at both ends of the floor.”

“He is a very versatile offensive player with a skill set that makes him very difficult to defend,” Bargar said. “He can score both inside and out and is very effective in transition. He will carry a big load for us offensively this year until some of the younger players can hit their stride. Jenson has really worked hard on his game over the years and I look forward to him having a great season.”

Seniors Cole Weiss and Mike Vandertill are the only other projected starters with varsity experience.

“Cole provides our team with some physicality and toughness inside. He plays his role very well by defending and rebounding, but he also does a nice job of scoring when the opportunity is there. We think Cole will play an important role for us this year,” Bargar said. “Mike is a solid all-around player that can help us in a variety of ways. Mike is one of our better defensive players who often is called upon to guard the other teams’ best perimeter player. Offensively, he moves well without the ball and does a good job finishing at the rim. He has a chance to play a major role for us this year.”

“Cam does a really good job running the show as a point guard. He is fundamentally sound in all areas of the game and makes good decisions on the court. Cam is a very good passer that sees the floor extremely well. He handles the ball well under pressure and has the ability to make a 3-pointer. We expect Cam to have a big impact on our team this year,” Bargar said. “Josh is a player that could play all five positions for us if needed. He has a great understanding of how to play the game and also brings an intensity that is contagious for the rest of our team. Josh anticipates very well, is very good with the ball, has a good mid-range game and can finish at the rim. We expect a big season from Josh this year.”

The Tigers have five seniors ready to step in when needed.

“Jack got a chance to start several games as a junior. He has tremendous speed and quickness that can cause havoc defensively. He can really push the ball in transition and has a chance to be one of our better 3-point shooters,” Bargar said. “Peyton is a high-energy player that really understands his role and does all the little things that help teams win. Peyton has a knack for the ball, whether he’s getting loose balls on defense or grabbing an offensive rebound. He has a chance to help our team this year.”

Jonathan Edwards, a 5-foot-8 guard, and Matthew Suzelis, a 6-foot-2 forward, return to the varsity roster.

Edwards is a solid defender and also protects the basketball on the offensive end. He’ll provide depth at the guard spot.

Suzelis can play inside or outside and moves well with the ball. He’s a threat to score from behind the arc.

“Sean gives us another option inside. He is a very smart player that understands how to play the game,” Bargar said. “Evan is another high-energy player that will give us depth at the point guard position. He competes hard on the defensive end and has the ability to make a 3.”

Thompson is a consistent shooter from behind the arc but he also can drive to the hoop when necessary. Zaluski plays a physical brand of defense and can pull up and score on the perimeter or down low. McMullen provides toughness inside for the Tigers.

Perez has the potential to dominate on either end of the court.

“Xavier is a dynamic player with good quickness and athleticism,” Coach Bargar said. “He competes hard on both ends of the floor. Offensively, Xavier is very good in the open court, can get to the basket and has the ability to shoot the 3. Once he gets comfortable playing at the varsity level, we expect big things out of Xavier.”

Pirates bounce back with win over Gilmour