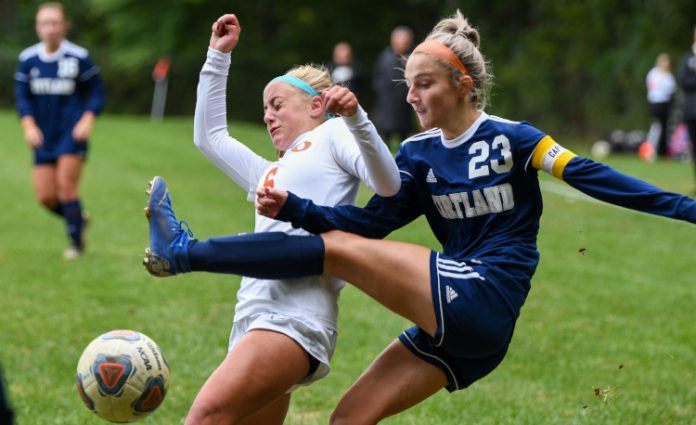 KIRTLAND—After a disappointing tie at Berkshire on Tuesday, Kirtland bounced back with a 5-1 win over visiting Orange at Recreation Park on Thursday.

Erika Zschuppe scored all five of Kirtand’s goals in the win.

“It was a great win tonight,” said Kirtland acting head coach Ivica Miljak. “I thought it was a complete 80 minutes from us, which is exactly what we needed after an uncharacteristic slow start and slow game against Berkshire on Tuesday.”

The Hornets were much more at home on their wide field and used it to their advantage in creating space for Zschuppe to work her magic.

Stephanie Drazetic won a ball near midfield and led Zschuppe to the corner. From there, Zschuppe did the rest in giving the Hornets a 1-0 lead with 30:42 left in the first half.

Zschuppe scored her second goal two minutes later and she made it 3-0 with 12:33 left in the half.

“We moved the ball around very nicely today,” Miljak said. “We’ve been getting stuck on one side of the field, whether it’s the left or the right, we get tunnel vision sometimes. We’ve really been working on opening the game and using the full width. I thought after a few minutes when they started doing that, they started looking a lot better and created a lot of chances off of it.”

Zschuppe’s fourth goal came 13 minutes into the second half.

“We were very hungry,” Zschuppe said of her team’s mindset after Tuesday’s tie. “We had a long discussion, a little team talk; after that, it felt very nice to come out there. We played our hardest, we did what we talked about, and I couldn’t be happier with how we played.”

Sydney Sarver got Orange on the board with her strike into the right corner with 4:24 but Zschuppe responded two minutes later to close out the scoring.

Kirtland improved to 6-1-3. The Hornets host South on Tuesday. Orange dropped to 4-3-1 and host Hawken on Thursday.