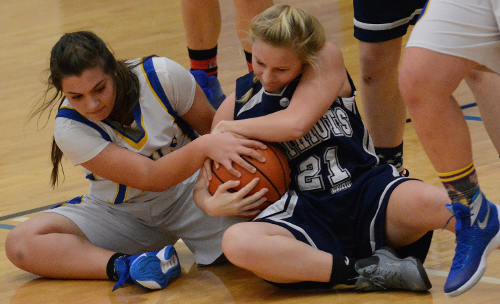 INDEPENDENCE—Hallie Zumack scored a game-high 18 points and Jessica Dmitruk pitched in with 11 to lead Independence to a 53-46 non-conference win over Valley Forge on Saturday.

It was the first win for the Blue Devils, who improved to 1-2 on the year, but it didn’t come easily.

“We needed it,” said Independence coach Mike Marcinko. “We started 0-2 without people. Having two starters out at Lutheran West, having one starter out at Columbia, against two good teams too, but we were in both games. They needed it. Just in general you need your first one. You’ve got to crack the seal so you can get going. You don’t want them to start doubting themselves.”

Dmitruk scored nine of her 11 points in the first half to help the Blue Devils establish a 20-16 lead.

She hit back-to-back 3-pointers in the first quarter.

“The poor girl is just sucking air because she has been out,” Marcinko said. “Last week she was out with the flu and we had yesterday off so she wasn’t exactly in game shape. We rode her early but she was dead tired late in the game. We expect her to contribute and she did.”

Valley Forge hit seven 3-pointers in the second half but Zumack scored 16 of her 18 points in the final 16 minutes to keep the Blue Devils ahead.

“Hal bailed us out in the second half,” Marcinko said. “That’s what senior leaders do. They step up.”

The Blue Devils built a 32-24 lead midway through the third but the Patriots, behind their long distance shooting, tied the game at 39.

Independence pulled away late in the fourth quarter.

“We survived,” Marcinko said. “We could have folded and done some really bad things down the stretch. We hit free throws, we took care of the ball and got rebounds.”

It was a gut check for Independence’s youthful roster.

“We could have folded,” Marcinko said. “We’ve got young kids. Sophie Piteo, that was her first varsity time. Mia (Coudriet) is a freshman. Hannah Walker is a sophomore that didn’t have any varsity time. Megan (Kuczmarski) didn’t have any varsity time. We’re young, other than Zumack and Julia (Riley). Jess was out all last year. In a sense, even though on the program we have a decent spread of ages, we’re lacking experience. Collectively, we could have really kind of went in a hole but they didn’t. They handled it, made some plays, got some stops and we won by seven.”

Anna Massey contributed to the cause with nine points while Kuczmarski scored eight. Coudriet pitched in with five and Walker scored two.