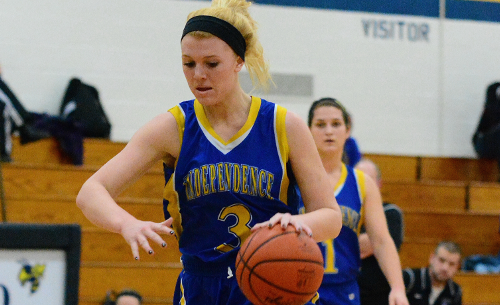 Hallie Zumack scored a team-high 15 points and Halle Dorko added nine to lead Independence to a 48-41 win at Trinity on Monday. The win was the fourth straight for the Blue Devils, who improved to 9-5 overall.

“I’m obviously very pleased,” said Independence head coach Mike Marcinko. “We got a road win and any road win is a good road win. Trinity is solid. They have a big girl that we had to deal with and they’re very physical. I thought our gals responded well.”

“We had our moments where we had some inexplicable turnovers but for the most part they fought through getting reached at and shoved,” Marcinko said. “They kind of took a beating and they got through it and basically made (Trinity) pay the price by basically getting to the rim and making free throws.”

The two teams played nearly even in the second half as Independence maintained its lead and held off a Trinity surge and came up big on the offensive end in key situations.

“It was a battle, an absolute battle,” Marcinko said. “They’re very physical. We hit some key shots. Nicole Ferrara hit a three in the third quarter. She was 5-of-6 down the stretch at the line.”

Zumack was always in the right place at the right time for the Blue Devils, who attacked Trinity’s zone by getting the ball down low.

“We knew the short corner would be available and we ran some things for her,” Marcinko said. “I also thought the gals did a very good job of finding her. They kind of extend their zone a little bit and Nicole did a nice job of driving and finding her. There were a couple of times Dorko would call up the ball in the paint, drove then kicked it to her. There was a lot of different things where she got, there were some put backs, some layups, some jump shots. There was a nice array of shots where she did something on her own and other times the girls got in gaps in drives and kicked it to her.”

Dorko’s contribution was a bonus for the Blue Devils. After suffering an ankle injury over the weekend she was questionable coming into the game.

“She gutted it out because her ankle was gimpy,” Marcinko said. “She was in pain afterward. She gave us everything she had, like any other day, but I know she was on about one and a half legs not two solid legs.”

Julia Riley struggled in the first half as she adjusted to the physical nature of the game. Once she found her stride she became a force on both ends of the floor. She finished the game with eight points.

“I thought she did a good job,” Marcinko said. “Early in the game the physical nature of the game got to her but she shed that and in the second half she’s going to the rim getting fouled, finding people open, handling the ball. I thought she really did a great job of adjusting to the pace and physicality of the game, which is a great growth component of her being a better and better basketball player.”

Victoria Sirna contributed with five points for the Blue Devils and freshman Sophia Trombetta came off the bench to provide some crucial minutes on the defensive end of the floor and she also drained a big 3-pointer.

“She came in and did some defensive work for us in the second half,” Marcinko said. “I don’t think I got her in as much in the second half but when she did play she got the ball to the right people and she defended one of their shooters and got a couple steals and deflections. She was flying around the gym making plays.”