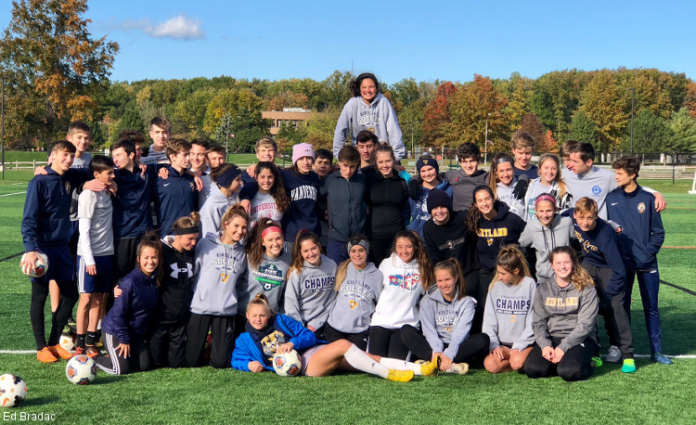 Kirtland High School is just one of five schools in the state of Ohio to advance both its boys and girls soccer teams as well as its football team to the regional playoffs this fall.

Community support, individual talent and hard work certainly helped the Hornets achieve success in all three sports, but the Hornets also benefit from several family ties that span across all three teams.

Each of the Hornets’ regional-bound teams is coached by a Kirtland resident. Two of those coaches, as well as two boys’ soccer assistant coaches, have a daughter on the girls’ soccer team. Kirtland also has six sets of siblings spread out across the three rosters.

Tiger LaVerde, who guided the Hornets to a perfect 10-0 mark and the No. 1 spot in the final AP Division VI state football poll this season, will be busy preparing the Hornets for their showdown with Steubenville Catholic Central on Friday, but he’ll surely find time to travel to Solon High School on Tuesday night to watch his daughter Leah compete with the Hornets in a Division III regional soccer semifinal against Canfield South Range.

Leah LaVerde has scored a pair of goals and assisted on four others for the Hornets this year.

John Valentic reached his 200th career win earlier this year and on Wednesday he’ll lead the Hornets’ boys’ soccer team in a regional semifinal against Kidron Central Catholic at Green High School. He too likely will be seen at Solon on Tuesday as his daughter, Lilia, is one of Kirtland’s top girls’ soccer players.

Valentic’s assistant coaches, Hans Zschuppe and Wilson Vladic, also have daughters who will suit up for the Hornets at Solon.

Zschuppe’s daughter, Erika, leads the Hornets with 31 goals and also has contributed three assists this season as a freshman. Vladic’s daughters, Gabby and Giulianna, have helped lead the Hornets to a 17-2 record this season.

“Unique is definitely the way to describe the Kirtland community and its support of all sports and activities,” Coach Valentic said. “The fact that you have parents and siblings involved across sports tightens the bond that much more. We’ll all go to each other’s games to support the kids because we’re connected and invested. Tiger called me yesterday because we didn’t see each other at school to congratulate me and wish us well. I saw the mayor Sunday and he told me he had the fire trucks on call and ready to go to escort us out of town and wish us well when need be. The football players I have in class always congratulate me and ask, ‘Who’s next?’ It’s special and I, and the boys’ soccer team, are lucky to be a part of it. Regardless of the outcomes of the coming games, I wouldn’t want to be anywhere else.”

Ed Bradac, who also reached career win No. 200 this season with the Kirtland girls’ soccer team, believes the tight-knit community plays a major role in the success of its athletic programs.

“For me, it’s always been about community,” Bradac said. “I went to school at Kirtland, both my wife and I went there, and my kids now go there. We live in the community. Everything revolves around the school district for us, in a good way. I know the same holds true for Tiger and for John. So much of our lives are tied to this place, so it’s exciting. We live and breathe it and we’re emotional about it. You want to see the kids succeed and do well. It’s not just about wins and losses; it’s about life in general. We’re excited for them.”

Bradac and Valentic teamed up for practice on Tuesday as the 2018 season saw the girls and boys both win district titles in the same year for the first time.