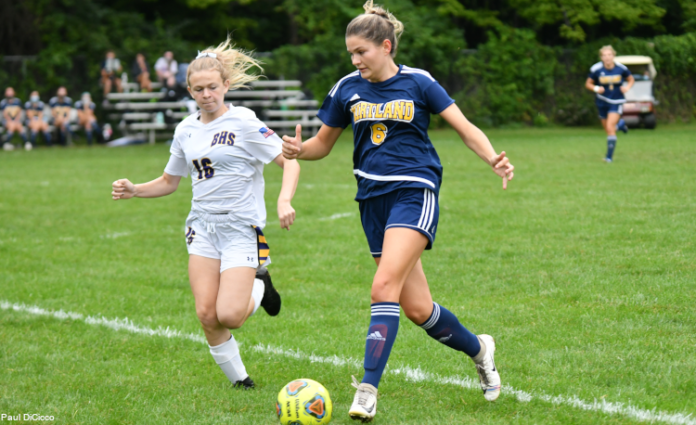 KIRTLAND—Chagrin Valley Conference rivals Berkshire and Kirtland had extra incentive to play for in their afternoon showcase at Recreation Park on Thursday.

The host Hornets entered the game ranked No. 3 in Division III while the visiting Badgers came in at No. 14.

In the end, Kirtland won its 11th straight game against Berkshire, 4-0.

“I thought the first half was probably our best first half of soccer this year,” Kirtland coach Ed Bradac said. “We moved the ball nicely and went sideline-to-sideline.”

That movement set up the Hornets’ first goal just five minutes into the contest.

Reilly Greenlee pushed the ball up the sideline to Leah LaVerde, who crossed the ball back across the goal to Greenlee for the finish.

“The first goal was nice to see, just the way that we moved the ball and then Leah having the presence to play the ball all the way past the goal and Reilly didn’t overplay the ball,” Bradac said. “She had a nice shot and put us up 1-0. We were able to score that five minutes into the game so we were able to play really relaxed after that. It was a nice goal for us.”

Erika Zschuppe celebrated her birthday with a pair of second-half goals to push the Kirtland lead to 3-0.

“I felt like she had a little extra pressure on her because I think she wanted to score on her birthday,” Bradac said of Zschuppe. “She took it upon herself and made a couple of moves and hit a beautiful shot up into the right corner of the goal.”

Bella Piazza closed out the scoring with her second goal of the season.

“Her goal was her being in the right place at the right time,” Bradac said. “She didn’t panic and played the ball into the net.”

Kirtland’s defense did the rest at it recorded its fifth clean sheet of the season.

“I can’t say enough about Corinne (Aquila) and the four girls back there with her,” Bradac said. “That’s now Brooke Alfieri, Macy McIntosh, Corinne Greenlee and Amber (Yurick), who did a great job winning the 50-50 balls.”

Kirtland, who is now 11-0 against Berkshire all-time, hosts Laurel on Monday and then travels to West Geauga on Wednesday in what should be another game featuring two state-ranked teams.

Berkshire dropped to 4-2 after the loss.

“It wasn’t the outcome anyone on our side hoped for, but it certainly didn’t feel like a 4-0 game,” Berkshire coach Ian Patterson said. “We gave up an easy goal early by not marking their outside back on the weak side but that didn’t affect our mentality much as we tightened things down the rest of the first half. We held one of the best attackers in the area in Erika pretty quiet until she got free in the second half scrambling around the midfield until she found space and hit a beautiful strike to the top right corner that our keeper got her hands on but it wasn’t enough to stop it. Even after their second goal we continued to tighten down the defense and didn’t give in to their brutal relentless attack again until we started making some aggressive changes in the lineup with about 15 minutes to go and conceded two more in the last 10 minutes. Our offense struggled a bit to retain possession with our leading scorer and offensive leader, Allie Barcikoski, restricted on minutes because of a recent injury.”

While the Badgers came up on the short end of the scoreboard, they remain upbeat knowing their two losses this season both came to teams who reached the state Final Four last season and return talented squads this fall.

“We have grown as a team from each of those two matches more than our other four combined,” Patterson said. “It’s a reality check for us and a reminder of where we are, where we’ve come from as a program and how far we still have yet to go to catch up to these other powerhouse CVC teams. We’re happy to be in their division and to be learning from these tough teams and intelligent, experienced coaches. We film every game so I know my girls and our coaching staff will watch this one at least a few times this upcoming week before Hawken next Thursday and there will be a handful of things to take away from this one for each girl. I’m glad we had some tough teams early on our schedule so it gives us more time to figure things out and work on them before the end of the regular season.”