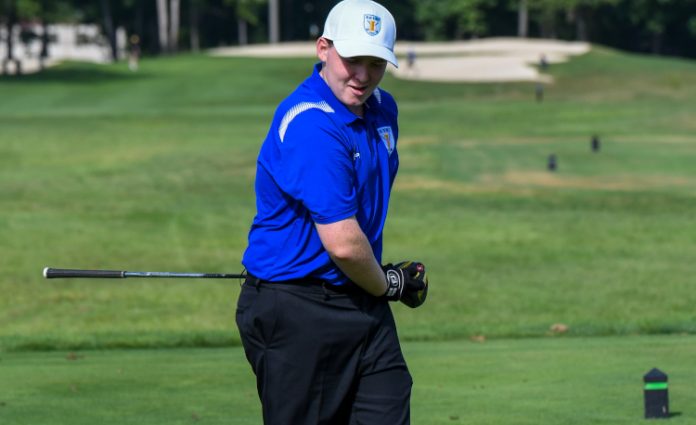 Every shot mattered for the Independence boys’ golf team as the Blue Devils earned their first trip to the state tournament with a strong performance at the Division III Tannenhauf District tournament on Thursday.

The Blue Devils carded a 331 to place third overall. The top three teams and top three individuals not on a qualifying team advanced to the state tournament.

“It was a long, good day,” said Independence coach Mike Marcinko. “It’s an honor to set that mark and be the first one to get there. There’s a sense of pride and accomplishment, maybe a little extra because of that. We were waiting for the scores and results, just hanging around on the picnic table. The guys asked when the last time or if ever we had gone to state. We found out they were the first.”

Independence’s girls’ team earlier in the week punched their ticket to the state tournament for the fourth time since the program’s founding in 2014.

All season long, Marcinko has preached to his players the importance of every stroke and the Blue Devils learned firsthand just how right he was as they edged fourth-place Columbiana by just one stroke to claim the final team qualification spot.

“Two years ago, we win a conference championship by one stroke and today, we go to state by one stroke,” He said. “If any one of the five of us gives in to a bad day or a bad situation, we don’t advance. Everybody did that. Whatever the situation was in front of them, had to deal with their day.”

A.J. Marcinko had his best day of the season with a team-low 78.

“It was very good,” Marcinko said of stepping up at the right time for his team. “All that matters was that the team overall played well and we are through to states. I wasn’t worried at all. Obviously, this year has been rough but that didn’t get to me today. I just kept my mind focused and I always told myself, ‘I need to do my part for the team.’”

Marcinko has battled through an injury throughout the season.

Over the past couple of weeks, he finally has played consistently and it paid off with a trip to Columbus.

“Early on, and at times during the season, his wrist would flare-up. It hasn’t been the easiest for him to focus, whether it’s mentally or physically, but he’s plugged away and as the year has gone on I think the arm has gotten stronger and it bothers him less,” Coach Marcinko said. “Lately here, with the conference tournament and today, the last few weeks he has put together some solid rounds. Today, he was lights out. He’s capable of that but unfortunately, he’s been inconsistent this year.”

Tannenhauf has narrow fairways, which forces players to hit their drives into tight spaces or deal with the trouble playing out of the rough.

Marcinko was straight off the tee box and even used an unorthodox style on his second shot on the 524-yard, par-5 16th hole.

“At Tannenhauf, it’s narrow so you’ve got to keep it in your yard,” Coach Marcinko said. “If you stray and you’re in the woods, there are no easy outs. You either take your medicine or you gamble and if you gamble poorly it really blows your card up. For the most part, he drove it well.”

With a strong drive to start the 16th, Marcinko opted to stick with his driver for his second shot.

That move paid off as he used the extra club length to leave his ball on the front of the green. After a lag putt, he sank his next putt to lock in a birdie.

“My first shot was well hit over the trees and in the fairway,” A.J. Marcinko said. “My second shot was about 330 out. I’ve hit driver off the deck before so I knew I could use it and it worked perfectly. Nice and simple two-putt for birdie.”

Charlie DeCapua shot an 82, Mark Pillar finished with an 83, and Sam Coddington closed out the scoring with an 88. David Eichler also competed and finished the tournament with a 92.

“The guys as a group had a solid day,” Coach Marcinko said. “Obviously, Mark has a different set of goals on his rounds. I know an 83 for him, in his eyes, he has moved beyond that and his target is shooting in the mid-70s. I’m sure he wasn’t thrilled, but we have been talking about how every shot matters. Don’t give in to a bad day; don’t give in to a bad round or a bad hole because every shot matters. Sam wasn’t happy he had an 88 but that’s still a good day. On some of the holes he had, he could have blown up and he could have had a 90 or something, but he didn’t. He made every shot count and it came into play with one stroke being the difference.”

Qualifiers: Top 3 teams and 3 individuals not on a qualifying team.

Three Hawken golfers finished among the top five individual placers to lead the Hawks to the team title at the 2017 Badger Invitational on Tuesday.