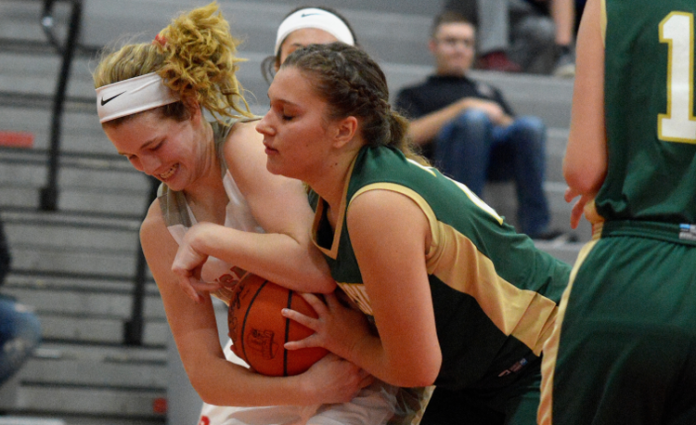 Lakeside rallies for win at Cardinal

MIDDLEFIELD—Cardinal’s foul trouble opened the door for visiting Lakeside to erase a double-digit halftime deficit on the way to a 52-51 win over the host Huskies on Wednesday.

Camille Cummins, who scored eight of her team-high 13 points in the first half as the Huskies built a 31-18 lead, picked up her fourth foul just seconds into the third quarter. That sent her to the bench and the Dragons outscored the Huskies, 17-2, to take a 35-33 lead into the fourth quarter.

“They made some really big shots,” Cardinal coach Luke Kruse said of the Dragons. “You could tell they were coming into this gym trying to get an upset and they played hard for 32 minutes. I thought in that third quarter, that was the story of the game. We lost Camille and we didn’t play well as a team. They made some big shots and in the fourth quarter we tried to dig out of that hole but they clearly had the momentum.”

Cardinal took advantage and outscored the Dragons in the second, 20-7.

Lakeside turned the table on the Huskies in the third quarter when Cummins was forced to sit for nearly the entire eight-minute quarter.

“It definitely changed the complexion of the game when she went out, there’s no doubt about it,” Kruse said. “But, I look at the girls in our locker room and I think if she didn’t even play a minute that’s a team we should have beat. Starting from the top, me included, I think we maybe saw their score in the first game and thought about how bad we beat them last year and we weren’t as mentally prepared for them as we should have been.”

“We faced a lot of adversity,” Kruse said. “We missed a lot of shots, we had a lot of fouls and they made some big 3-pointers that you don’t think they’re going to make all of those but they do. That’s the storm that comes. You’re either going to wilt under the pressure or you’re going to overcome it and try to make a run and turn the tables on them.”

Cummins returned in the fourth quarter and scored five points to spark the Huskies to an 18-point quarter but the Dragons made key plays down the stretch to seal their win.

An Ashley Gubanyar layup tied the score at 48-48 with 2:04 left but Brielle Hathy connected on a 3-pointer with 54 seconds left to give the Dragons a 51-48 lead.

Lakeside added a free throw but Haley Domen hit a 3 with 24 seconds remaining in regulation to pull the Huskies to within one point.

“I thought we had some bursts of effort there to try and turn the tables but then they’d come down and make a big shot, make some free throws and they managed to keep that lead for most of the fourth quarter,” Kruse said. “Hayley made a big shot down the stretch there to give us a chance there to make a comeback.”

Following a Lakeside charge, the Huskies had a chance to win the game with the ball near midcourt with 2.4 seconds on the clock. Lakeside punched the ball out of bounds with one second left and Huskies couldn’t get off a shot.

Cummins and Gubanyar both finished with 13 points for the Huskies while Brittni Lawrence added eight and Domen finished with seven. Adriana Naples contributed with six and Annamarie Pollack finished with four.

Cummins also set a new school record with 25 rebounds in a single game. She also finished with team-highs in assists (6) and steals (5).

Independence opens with win at Cardinal