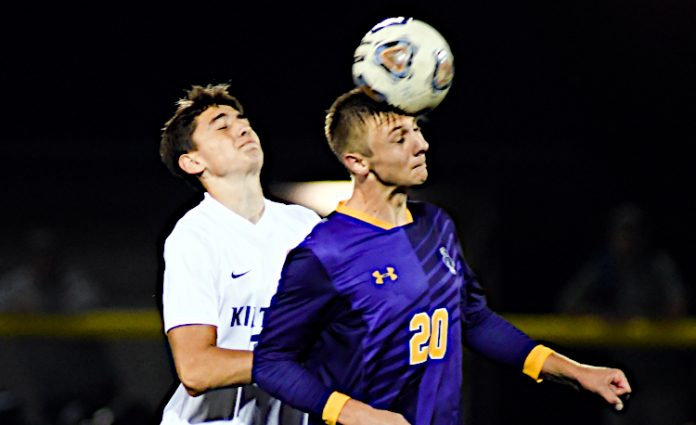 The Hornets and Badgers both entered the game 4-0 in league play and in a tie for first place in the division.

Vince Carriero scored with just over six minutes remaining in the first half to give Kirtland a 1-0 advantage. That lead held until Jack Jacobs punched in a deflected ball with just 9:55 left in the game to seal Berkshire’s first result against Kirtland since a 2-2 tie in 2008.

“For years, since I’ve been here, we’ve been playing Kirtland and it’s been on the opposite end every single time, so the fact that we were able to dominate possession-wise, at least going into the second half, this is an incredible step for the program going forward,” said Berkshire coach Nick Fejedelem.

Despite the tie on Tuesday, Kirtland still dominates the all-time series between the Hornets and Badgers. Kirtland is 20-0-2 against the Badgers since 2005, which includes four post-season games.

The Hornets have outscored the Badgers in those games, 122-18, which makes Tuesday’s draw even more impressive.

“There’s never a moment that these guys give up,” Fejedelem said. “The fact that we were able to be down one to nothing and come back with that same tenacity and intensity and put one away, we didn’t let our guard down after that happened and I’m just proud of the way that they held it together.”

A win on Tuesday would have given the Badgers or the Hornets the upper hand in winning the Valley Division title with just two league games remaining each.

Instead, either team will need some help from other league rivals to win the championship outright.

“You want your destiny in your own hands,” said Kirtland coach John Valentic. “Now the future is kind of rough, so were’ a little disappointed with the result. I think it was fair and Berkshire deserved to be in the game. We’re 10 games in and if we have a bad game every 10 games, I’ll take it. We just did not have it today and Berkshire was up for it. Based on our usual expectation of play and the substandard performance today, and Berkshire’s matching up being better than us, a 1-1 draw is actually a victory for us and I hate to say it, but it’s true.”